Throttling … yes it’s a word. Learn it. Know it. It can be a bad thing. And it’s a very possible thing for Lexington if TWC becomes Comcast. 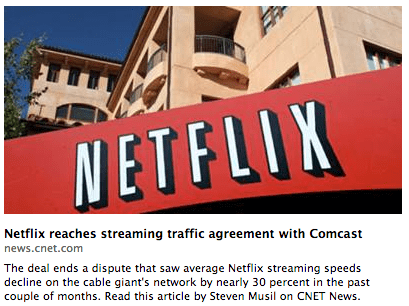 Throttling can mean selectively slowing down service for one particular type of web traffic or source. Imagine if your ISP decided which sites you got to see quickly and which sites they wanted to slow down.

Example: Comcast throttled speeds of Netflix content so much that the streaming movies and tv shows were barely watchable. It was such a problem that making news this week was a deal where Netflix just paid in a roundabout way for that to stop being a problem. http://online.wsj.com/news/article_email/SB10001424052702304834704579401071892041790-lMyQjAxMTA0MDIwMzEyNDMyWj

While some people are saying that this is simply paying Comcast to be part of Netflix’s CDN (content delivery network) which is a legit thing they could be paying for:
http://blog.streamingmedia.com/2014/02/media-botching-coverage-netflix-comcast-deal-getting-basics-wrong.html

Others see the payment as a round about way to get Comcast to stop punishing Netflix for being a competitor to cable tv: http://news.cnet.com/8301-1023_3-57619353-93/netflix-reaches-streaming-traffic-agreement-with-comcast/

Either way you look at it, “the deal ends a dispute that saw average Netflix streaming speeds decline on the cable giant’s network by nearly 30 percent in the past couple of months.”

It’s six of one and half dozen of the other.

But I’m in agreement with the quote at the bottom of the CNET article: